It’s “Hard to be Bearish” on Ethereum as Key Supports Hold: Analyst – CryptoGo!

It’s “Hard to be Bearish” on Ethereum as Key Supports Hold: Analyst

Ethereum has slipped lower over the past few hours from its local highs around $395. The coin currently trades for $382, not too far from those highs but still down by a few percent.

Despite this rejection just shy of the pivotal $400 resistance, analysts remain optimistic. One crypto-asset trader recently noted that with the cryptocurrency holding above critical supports, price action is healthy

“Think the market is looking to make a full recovery if price get flip $380 into support but that said current price action is looking very bullish and its great to have flipped $360. The chance of retesting $280 gets less and less each day we hold above these levels… $ETH / USD Still finding it hard not to be bullish… Price would have to break below $360 for any real shift in momentum to the downside, healthy looking PA.” 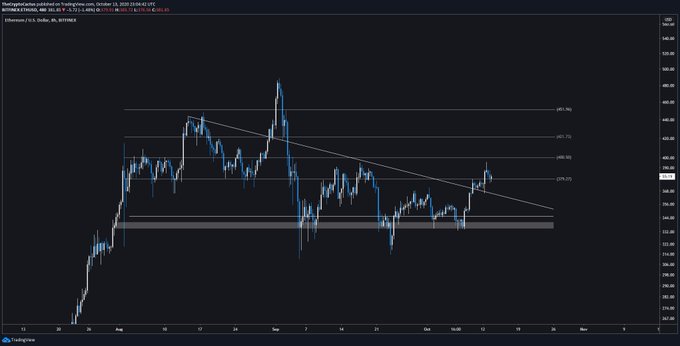 Others are also optimistic about Ethereum on a macro basis.

One trader noted that as long as Ethereum holds the prices in the vicinity of $350, it is set to double towards $720 in the coming months. $350 has long been an important level for ETH, having acted as a launchpad for the coin in 2017 and in the middle of 2018 during a dead cat bounce.

All Eyes on Bitcoin

Supporting upside in the price of Ethereum is an optimistic outlook for Bitcoin.

Tyler Winklevoss, a co-founder of Gemini, recently said that with the U.S. government pursuing another stimulus package, Bitcoin is making increasing sense:

“Stonks love nothing more than wen the money printer goes brrrr like an A-10 warthog. It’s full-fledged addiction that’s not going to end until it has to. When that will happen is hard to predict, but what’s certain is that #Bitcoin will b your only refuge.”

Analysts expect further stimulus to suppress the U.S. dollar, which should boost alternative assets like gold and Bitcoin.